In the coming weeks I will post a series of 4 post with pictures from my expedition in Southwest Greenland, a 5-week solo hiking and packrafting trip through extremely remote areas, roughly in the fjordlands and plateaus between the settlements of Kangerlussuaq and Maniitsoq. I had only one resupply en route in Maniitsoq. Apart from one hunting Inuit family on the second day, I did not encounter a single soul during the entire trek.

This trip offered the purest, most pristine wilderness I have ever travelled through. I want it to remain that way. Therefore I have not included geographical references in my report. Whilst this might sound a bit egoistic, I’m sure experienced wilderness travellers will be able to design their own route – the possibilities are virtually endless!

The first views of Greenland’s wild east coast, with massive glaciers calving icebergs into the North Atlantic, gave me the goose bumps again

The view of the ice sheet while descending towards Kangerlussuaq is completely different, with crevassed glaciers with meltwater streams sliding down towards the rolling hills at the head of the Søndre Strømfjord

Waiting for boat transport down the Søndre Strømfjord. To avoid a few days in less interesting terrain and an even heavier backpack, I decided to get dropped about 60km down the fjord.

Alone in the wild – the boat which dropped me along the fjord starts it way back towards Kangerlussuaq. I have 18 days and 270km ahead to reach Maniitsoq.

Climbing away from Søndre Strømfjord.

Descending into the valley in glorious sunny weather on the first day of the trip. There were almost no insects in this area after a long and dry summer.

I made an early start during the warm first days of the trip. the fjordwind picked up around noon every day, and to avoid headwind on the lakes and fjords while travelling west I tried to paddle as many kilometers as possible during the morning hours.

I reached the tip of the westernmost lake just as the wind picked up.

Cottongrass low in the valley

Reaching the fjord at the end of the second day. The last part of the valley the terrain became slightly harder with some swaps and easy bushwahcking, but overall travel was relatively easy.

Camping between the cottongrass at the tip of the fjord. A fierce 6bft fjordwind raged until sunset.

I paddled a 7km section on the fjord early the next morning through sea fog, with the fjord flat as a mirror. The weather cleared as I took out. To my big surprise, I met an Inuit family camping along the fjord; the men were gone for reindeer hunting, with the wives, the grandparents and children staying behind to pick berries and take care of the camp and to butcher the reindeer they shot the day before.

Although we could not talk because of the language barrier, I stayed with the family for almost three hours, with a mutual feeling of respect and understanding which is hard to explain.

Climbing away from the fjord

Climbing into the valley with my 32kg backpack was hard work. I climbed high above the valley floor, where a massive meltwater river thundered through an inaccessible gorge.

Following reindeer tracks through the upper valley. Travel through this valley was remarkably easy, with a few river fordings as only noticeable obstacles.

Travelling through the beautiful valley on the fourth day of the trip.

Travelling through the beautiful valley on the fourth day of the trip, once again in glorious sunny weather.

As I bended north into the next valley branch, the terrain started to become slightly harder as I approached the bushline.

Splendid bivy in the valley

I forded the large meltwater river braiding through the valley near this point, a long thigh-deep wading. I think fording this river is only possible late in the season and in the morning hours when the meltwater flow reaches its minimum.

Climbing towards the pass and west into the next valley. 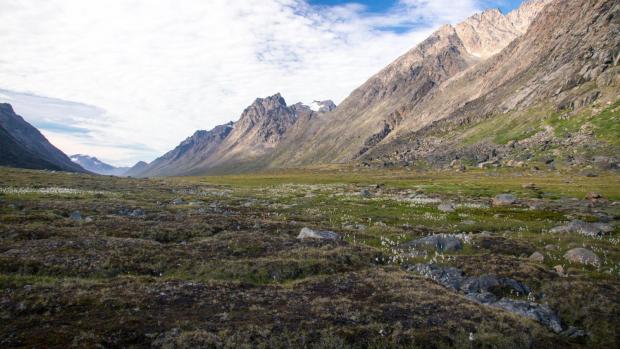 This valley was harder to travel through, often with swamps and squishy tundra with deep moss. 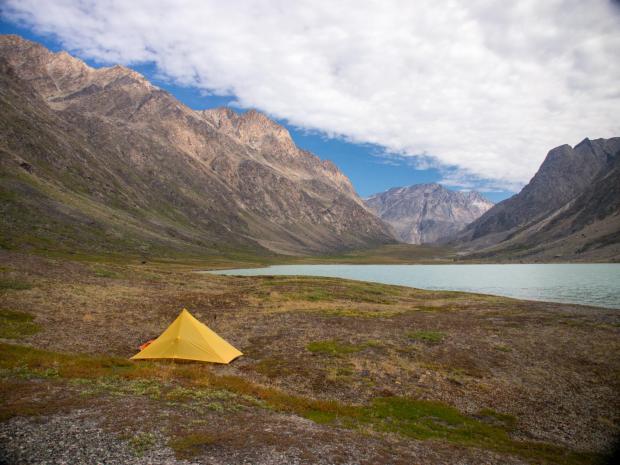 Camping along a nameless lake. After 4 days of glorious weather, a warm front came in that afternoon with light rain during the night.

Views towards the nameless lake. 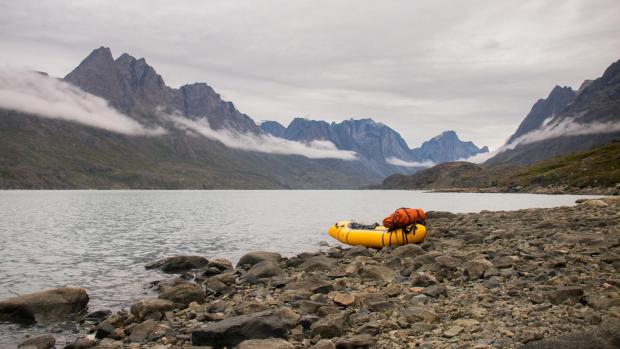 I hiked 12km down the valley in damp condition the next morning, often on annoying tundra terrain with low shrub and wet sections. When reaching the fjord around noon, I immediately inflated my raft to cover the 7km east in perfect conditions.

The next day it often rained and the cloudbase remained very low. As I had to cross a difficult pass to access towards the Søndre Strømfjord, I decided to wait it out. After almost 72 hours of grey skies and patchy rain, the weather finally cleared again on the morning of day 8, and I started rushing towards the pass.

Another view of the camp low in the valley while the weather starts to clear. 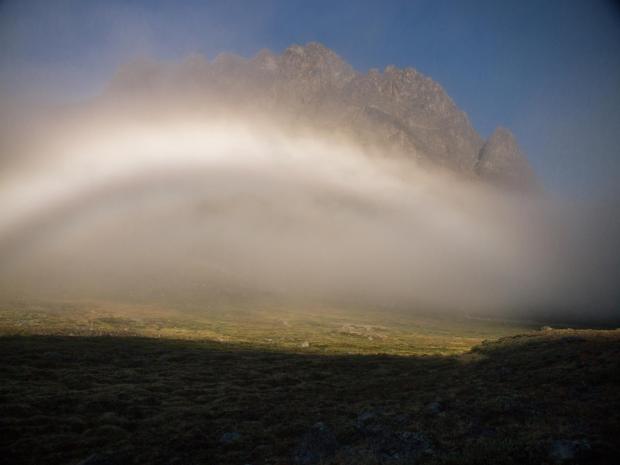 Fow bog while hiking up the nameless valley

Disolving morning fog while hiking up the nameless valley 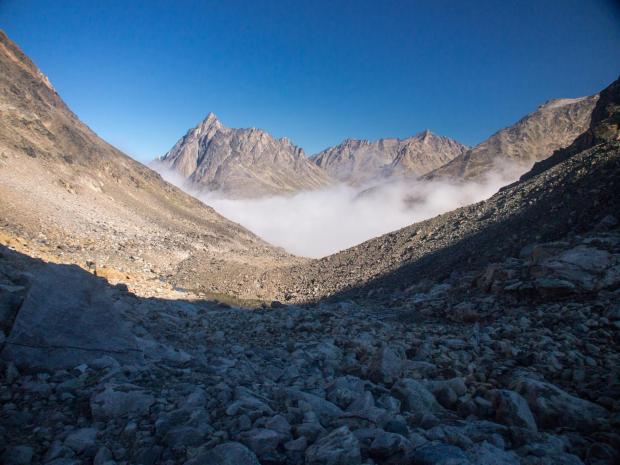 Crossing the nameless pass (which I called ‘patience pass’) towards the Søndre Strømfjord, often on moraine and boulderfields which required attention.

Descending in the lush, green valley on the way to Søndre Strømfjord. For the first time in the trip the insects were out in big numbers. It was glorious warm and sunny weather again and I had a full wash in one of the many ponds low in the valley.

The Søndre Strømfjord as seen from a nameless knoll. 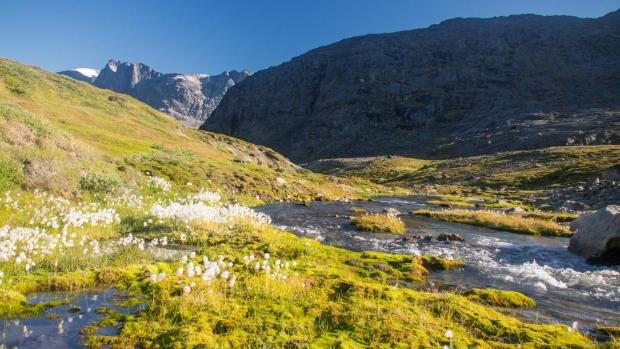 Low in the gorgeous valley

Camping low in the gorgeous valley. 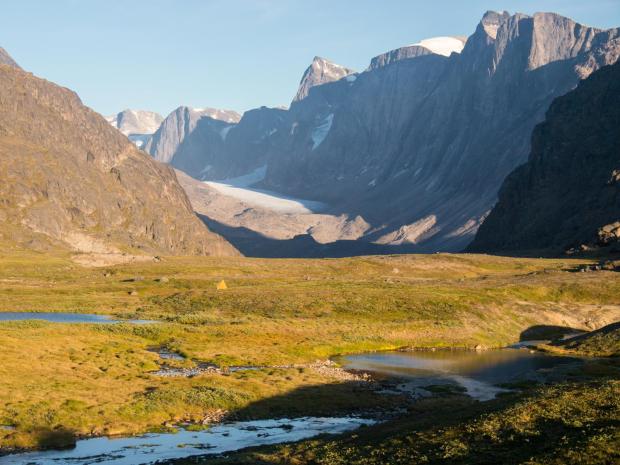 Camping low in the gorgeous valley, with the massive north faces of the mountains at the other side of the fjord in the back 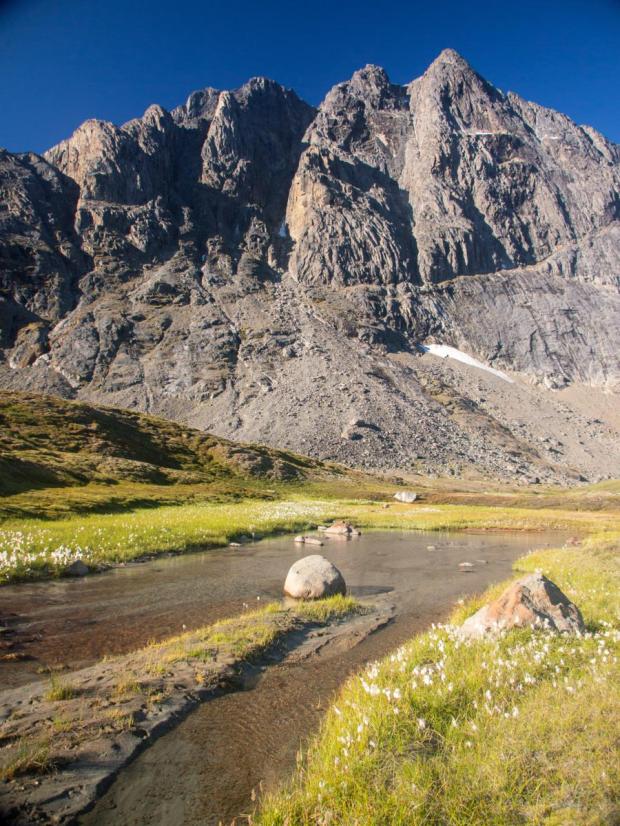 I have to paddle across the Søndre Strømfjord to gain access towards Maniitsoq, but in the evening and the entire following day the winds are too strong to make a safe crossing. The uncertainty linked to such daring fjord crossings always caused some stress. I used my extra day here to climb a mountain lining the fjord. 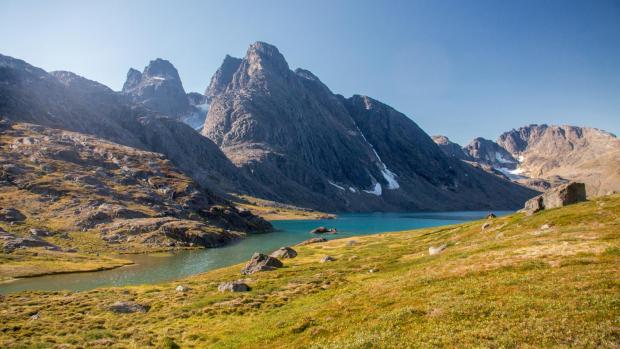 I made a long daytrip to climb the mountain (around 1000m) at the right. That day, I received news that my friend Karel had broken the all-time speed record on the Pacific Crest Trail. I decided to name the mountain (Karel Sabbe toppen) after him in honour of this incredible achievement. The beautiful lake now carries the name of his support buddy Joren (Jorensuaq)

Another view of Jorensuaq and Karel Sabbe toppen.

Looking back at the lake while starting the ascent of Karel Sabbe toppen. 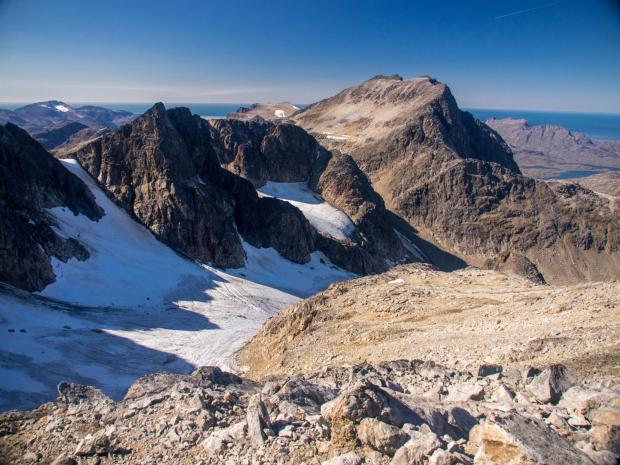 In the evening hours the wind, which sent high breaking waves across the fjord, finally started to fall. I did not hesitate a second, and decided this window to cross the fjord with my packraft – the most crucial decision of the trip.

Fighting against the incoming tide, I made my 6km crossing while the sun started to set. The wind dropped almost completely, but a nice swell was still present on the fjord.

Reaching the base of the valley at sunset. 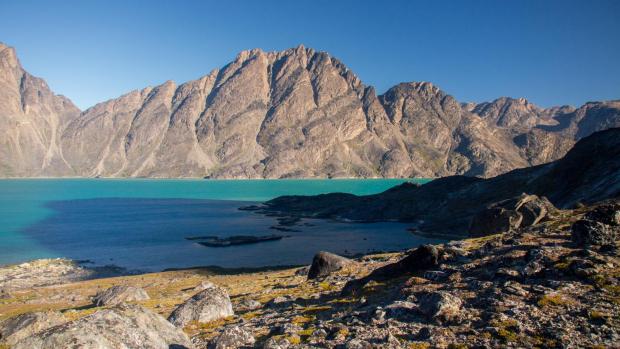 Crossing the fjord in the evening hours proved to be the most crucial decision of the trip. During the night the wind picked up again, blowing at 6bft by sunrise. And it kept blowing for 36 more hours. 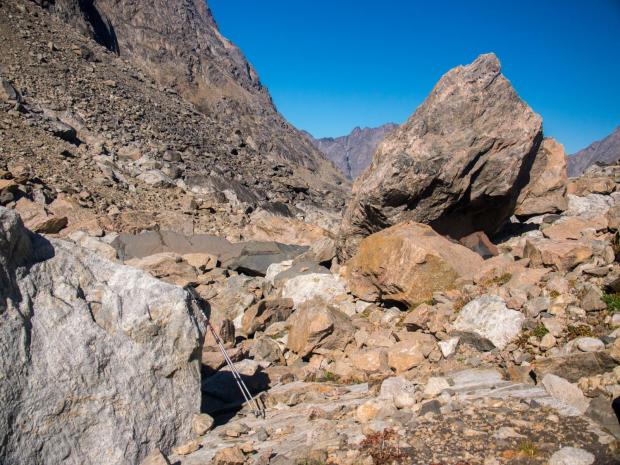 The valley was not the most easy to travel through, with some nasty moraines and boulderfields.

Reaching the next pass, with the massive north face of mountain 1360m in the back. 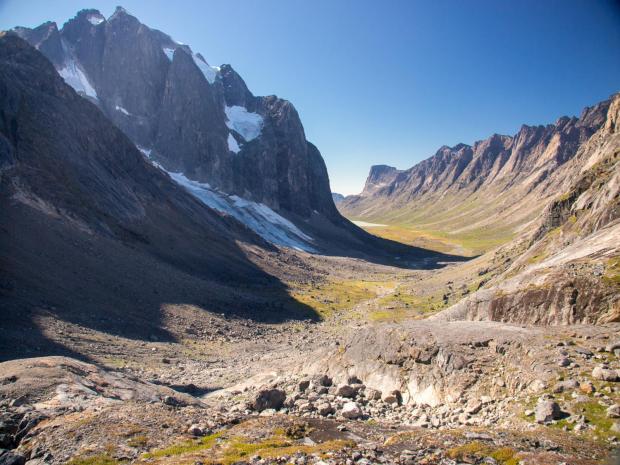 Descending into the beautiful lush valley – first on boulderfields, later on easing terrain. 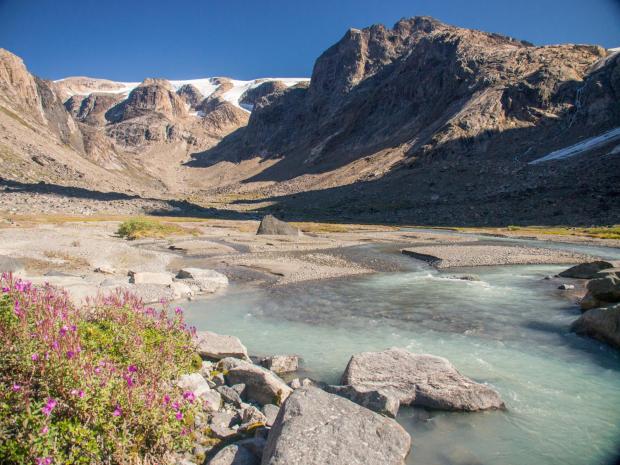 Looking back through the upper valley.

I paddled a wonderful 4km section on the river with a fierce 5bft tailwind.

Taking out at the southwestern tip of the splendid glacial lake. A fierce 5bft tailwind propelled me across the lake in no time. 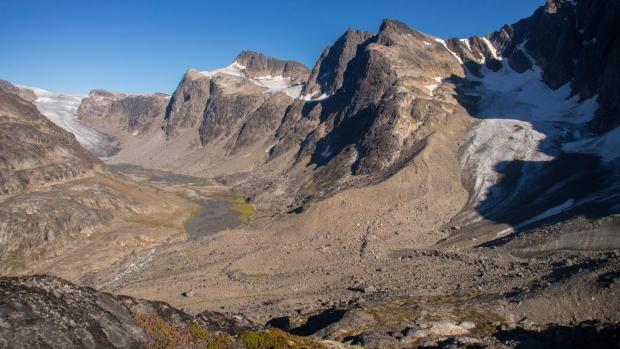 I tried to climb the nameless peak (around 500m) at the southern side of the lake, but stranded about 50m below the summit. the views into this side valley were remarkable anyway.

A splendid evening – my tarp can be spotted near the river connecting the two lakes.

A splendid evening low in the valley 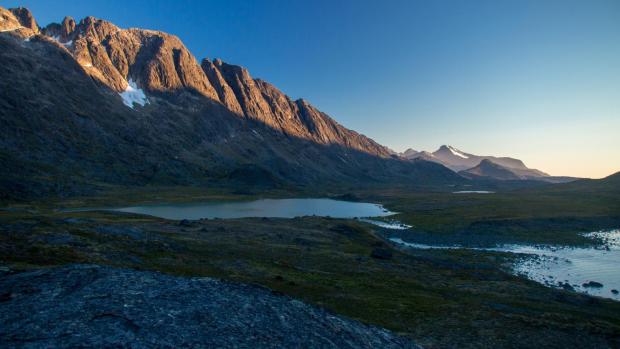 A splendid evening low in the valley

DISCLAIMER: I have received many messages asking for more details about my trip. Without underestimating anyone’s abilities, I want to point out that this was the most difficult trip I have ever made. The terrain was often harsh, with relentless boulderfields, moraine, serious river fordings, peat bogs, and quicksands near glaciers close to the ice sheets. There are no trails, no huts, or any other facilities for hikers along this route, and topographic maps are virtually inexistent for much of it (I used the 1/250000 Saga maps for over half of my trajectory). Backpack weight is heavy because of the lack of resupply options, I started with about 32-33kg despite using ultralight gear – but I tend to eat a lot! To packraft the fjords, one should have a good insight in the dynamics of tidal currents, (fjord)winds, katabatic winds, and how they interact in creating waves. If you are not able to fully assess these risks, or are not mentally prepared for the difficult terrain, you won’t have a lot of fun in the first place, and may end up in dangerous situations which I don’t want to be held responsible for in any way.

6 thoughts on “Qeqqata expedition – Part I: Along the lower Søndre Strømfjord”

Willem Vandoorne © 2011-2015 Unauthorized use and/or duplication of this material without express and written permission from this blog’s author is strictly prohibited.
Loading Comments...
%d bloggers like this: